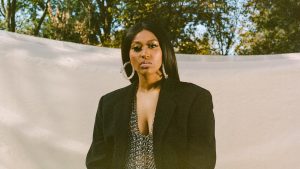 Jazmine Sullivan and Megan Thee Stallion definitely deserve to be given their flowers. Not only did both entertainers slay their performance but they also walked away as recipients of a BET award as well.

While we are happy to congratulate both women, we would be even more excited for a joint project between the two! Jazmine Sullivan seems to have shot her shot under one of Meg the Stallion’s posts that could have gotten the hopes up of fans.

The Texas Hot Girl shared a photo of herself to her Instagram with the caption, “Money meg.”

“MEG LETS DO A SONGGGG,” Sullivan commented. “I can’t dance, my knees are bad but I can sing sometimes! Lessgo where my old knee heauxs at??”

The post Jazmine Sullivan Reaches Out to Megan Thee Stallion for Possible Collaboration appeared first on The Source.