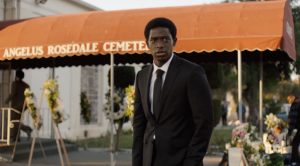 Snowfall is returning for season five!

The popular crime drama from the late and great John Singleton got an early renewal just four episodes into the fourth season.

Snowfall garnered a 41% viewership increase this season, which shows our favorite street entrepreneur, Franklin Saint, enjoying the fruits of his labor. But the cost is high and he may be in over his head while crack addiction and gang violence rising in his hometown.

In an exclusive interview with The Source Magazine, Damson Idris who portrays Saint said that John Singleton left the crew the “code” to continue the show without him.

“But the greatest thing is he left us all the codes to carry on and he left us with a passion. He, John was that the most passionate person. He would, he would run out if I did a good take and be like, ‘That’s it! That’s what I’m talking about!’ It was like the coach, like if you’re a basketball player and you just dunked he’s like the coach that runs out or the players that are going like this. Like, that’s how Jordan was. And, and it was difficult at the beginning without him, but then we all put our heads down focused and I made it our sole aim to create art and put art into the universe that Singleton would be proud and after watching season 4, I’m sure he’s smiling down at us,” Damson said.

Snowfall airs every Wednesday at 10:00 PM EST on FX. What’s your favorite part of the season so far?