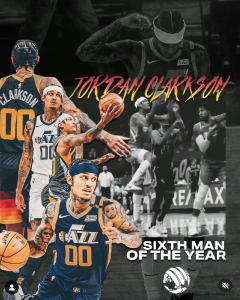 The Utah Jazz officially has the Sixth Man of the Year. Jordan Clarkson was crowned Sixth Man on Inside the NBA and was surprised by his teammate Joe Ingles in receiving the trophy.

During his extroadinary season, Clarkson averaged a career high 18.4 points, 4.0 rebounds and 2.5 assists in 26.7 minutes across 68 games.

Utah finish with an NBA-best 52-20 record and the fifth-highest single-season winning percentage in franchise history (.722). The Jazz earned the top seed in the Western Conference for the 2021 NBA Playoffs.

“For me, it was tough,” Clarkson said. “My first couple years because I started in L.A. during that time, but just coming to myself and trying to find the impact I can have in this game, and what I can bring to it. When I got that role, I just kind of took it, worked at it, and this situation — being traded here to Utah from Cleveland –– it really enhanced everything, just because everybody knows their role and knows what they are doing.”

The Jazz will look to bounce back after a rough start to the playoffs as they add superstar Donovan Mitchell back to the roster with the aim of evening their series with the Memphis Grizzlies 1-1.

The post Jordan Clarkson Named NBA’s Sixth Man of the Year appeared first on The Source.