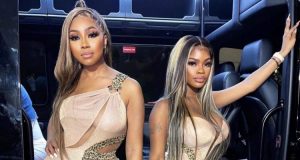 It has been a very busy past few weeks for the Quality Control family. Between Quavo and his drama with Saweetie, to the City Girls drama with Lil Uzi, to Offset robbery rumors circulating the internet we don’t know who has the pot the hottest right now.

In a recent live, JT was seen trying to calm down her superstar boyfriend from what it seems like was Uzi attacking Yung Miami. This caused Yung Miami’s boyfriend to step in and threaten to knock the teeth of Uzi’s mouth if he keeps up the disrespect towards his woman.

A lot of fans believed that the back and forth would split the rap duo apart after it seemed like JT wasn’t able to control Lil Uzi from “doing too much” on Instagram live.

JT stepped on her Instagram live to clear the air and address the rumors.

“Y’all wanna make it so bad,” JT stated in annoyance before she began to recall some of the comments that suggested JT isn’t being loyal in return to Yung Miami over a man. ” Let it go. F-ck outta here. Y’all be tryin’ to run with these narratives. Get gone,” she said.

The post JT Clears The Air on Yung Miami vs Lil Uzi Drama appeared first on The Source.