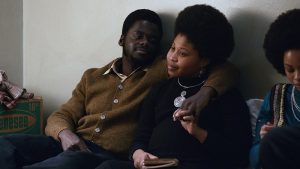 SPOILER ALERT: If you know the story then you know, but if you have not seen the critically acclaimed film, Judas and the Black Messiah, then you may not be aware of one of Akua Njeri, a main character, who changed her name from Deborah Johnson played by Dominique Fishback. She was Fred Hampton’s fiancé but the real Njeri has some thoughts on the historical events surrounding the Oscar contender’s source material.

Njeri sat down with Deadline Hollywood to dish on the film, and her thoughts on star actor Lakeith Stanfield who played William “Bill” O’Neal, and why she wholeheartedly does not believe O’Neal committed suicide.

In the exclusive interview, Njeri praised Stanfield’s performance as the notorious FBI informant who infiltrated to Black Panthers. “Before watching it onscreen, I watched LaKeith Stanfield in action,” she explained. “And I said to him, ‘you’re doing a damn great job, but I just can’t hug you. Because you are Bill.’ But he brought it, he really brought it. It was just so damn powerful.”

She went on to say, “He was O’Neal, with his mannerisms, the things he did. It’s always difficult, because I just don’t talk about it or watch it, I relive it, at some point. I still, today, haven’t watched the movie all the way through. I’ll get up and pretend I have to go to the bathroom, to get a break. It’s bringing up a lot of emotions, but this movie is an opportunity for people to have real discussion about the government and its relationship and its attack on the Black Panther Party, and that legacy. Those attacks continue today. I’m really proud of the movie and that I was able to be part of it. I think all the actors did a magnificent job, in bringing that portrayal to audiences today, right now.”

O’Neal actually passed away in 1990 at the age of 40.  Njeri doesn’t necessarily believe his cause of death, stating that when she went to his actual wake, the man in the coffin did not even resemble O’Neal, in her opinion. Sheesh!  “I was going to spit in O’Neal’s face, and turn the casket over, among other things I had planned. But when I got up to the casket and viewed him, I was frozen. Because it didn’t look like O’Neal,” Njeri revealed.  “I repeated to a member of the Black Panther Party who came up beside me, I said, that’s not him, that’s not him,” she added. “I don’t know if he was given a new identity or what, but I never believed that was O’Neal. There was a story of how, in a cocaine-induced high, he was very paranoid that somebody was going to get him. And he ran out in the Eisenhower Expressway and got hit by a car and was killed.”

This is not your average conspiracy theory and Njeri is a revered social justice warrior, so it makes sense to give this idea a little attitude.  But maybe there’s more to come on this front!

Watch Judas and the Black Messiah digitally or catch it in select theaters.

The post ‘Judas And The Black Messiah’: Akua Njeri Has Thoughts About William O’Neal’s Death appeared first on The Source.