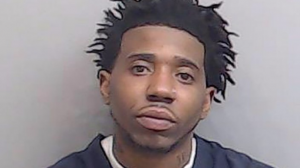 An updated report on the YFN Lucci case confirms that the Atlanta rapper has been denied bond in the 105-count racketeering case aimed at the Universal Blood Nation in the Atlanta area.

Lucci, whose real name is Rashawn Bennett, was denied bond by Judge Thomas Cox, who said, “The defendant will remain in a no-bond status at this time. Additionally, this court revokes any bonds previously issued in this case.”

Last month, Bennett surrendered to authorities after being indicted with 11 other people in the RICO indictment. He has been charged with aggravated assault, armed robbery, property damage, murder, theft, and more after a months-long investigation into their connection to the Bloods.

Lucci’s lawyer, Drew Finding, contends his client’s innocence, stating, “He’s not a gang member. What he is is an internationally recognized musical artist that is a triple platinum winner, that has performed all over the United States and all over the world.”

The post Judge Denies Bond for YFN Lucci In RICO Case appeared first on The Source.