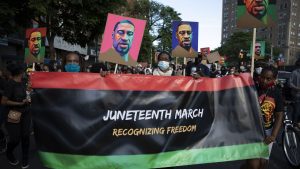 Wednesday the House passed a bill that will make June 19th, AKA Juneteenth, a federal holiday. Now, the legislation will be sent to President Joe Biden for his signature. CNN reports, the bill passed through House 415-14, after the Senate unanimously passed the legislation Tuesday.

“It’s not often when you can stand on the floor of the House and use the terminology, ‘I feel full,’” said Rep. Sheila Jackson Lee, D-Texas, who sponsored the House version of the bill, after its passage.

“Let us come together,” Lee said. “We are here to serve, and there’s more to come, in changing lives, for justice, equality and freedom. That is what happened today.”

The legislation was reportedly previously blocked by conservative Sen. Ron Johnson of Wisconsin in 2020, but he dropped his objection this week despite his concerns, allowing the bill to advance out of the chamber.

The US federal holiday will commemorate the end of slavery in the United States. On June 19, 1865, Major General Gordon Granger announced in Galveston, Texas, the end of slavery in accordance with President Abraham Lincoln’s 1863 Emancipation Proclamation. In 1980, Juneteenth became a Texas state holiday. In the decades since every state but South Dakota came to officially commemorate Juneteenth, but only a handful of states observe it as a paid holiday.

The post Juneteenth Officially A Federal Holiday appeared first on The Source.