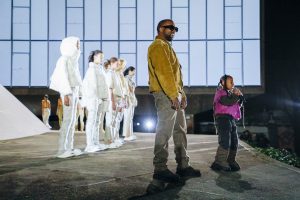 Kanye West is gearing up for the official release for his Yeezy-Gap partnership.

Last June the creative genius took to his Twitter to announce the exclusive 10-year-deal in a day he called, #westdayever. The series of tweets featured a small preview of the potential clothing from the collection, in addition to the logo. It was reported on Friday that the logo is official.

Gap’s stock immediately rose and has continued that trend since the announcement. Ye’s previous work experience at Gap is well-documented in his track, “Spaceship,” from his debut album. The full circle moment is a dream come true for Mr. West.

According to documents obtained by TMZ, the YZY-GAP clothing will include footwear, headwear, accessories, bags and more.

Over the past 7 years, Kanye West has created one of the most in-demand brands with his Yeezy sneaker line. The Yeezy-Adidas partnership has allowed him to not only dominate in fashion and foot, but build a lasting infrastructure. This infrastructure has led to Yeezy eclipsing the billion dollar mark as a company.

Now he is taking the same successful infrastructure to apply it to YZY-GAP.

Saying the sky is the limit for Ye is undeniably an understatement at this point in his illustrious career. It is only and clearly a point a view.

Although they have yet to announce a specific date, YZY-GAP plans to release the first line of clothing during the first half of 2021.