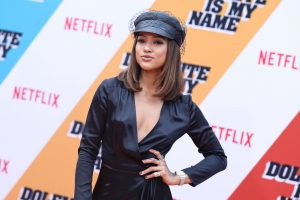 Karrueche Tran is not here for the rumors that she rekindled with her ex-boyfriend, Chris Brown.

Karrueche stepped into The Shade Room after the blog posted videos of the former flames at LeBron James’ Space Jam screening event.

“There was an event at Six Flags for Space Jam,” she wrote in a comment on TSR’s Instagram page. “There were a ton of other people there. Next.”

From the looks of the post, CB left moments before Tran was heading out. And as Tran noted, it was a star-studded event.

Don Cheadle, Chloe Bailey, Diplo, Zedd, and Tiffany Haddish were among those in attendance to celebrate the upcoming release of the highly-anticipated Space Jam sequel.

Karrueche Tran and Chris Brown finally split in 2014 when he welcomed his daughter, Royalty, with Nia Guzman.

The actress and model got a restraining order against the singer which she discussed in a 2017 interview with Ebro in the Morning.

“I’m always positive and I’m just focused, more than ever right now, on work,” she said at the time. “That’s just the goal for me. There’s no drama or anything like that. I do have the [restraining order] in place. We live our own lives and that’s how we move.” She explained that she filed the restraining order for her safety. “It just got to a point where it’s just like, I can’t. Just to make sure. And I live in L.A. I’m from L.A. So I move around how I wanna move, you know what I’m saying? So that’s what I felt that I needed,” she said.

The post Karrueche Tran Shuts Down Rumors That She Rekindled With Chris Brown appeared first on The Source.