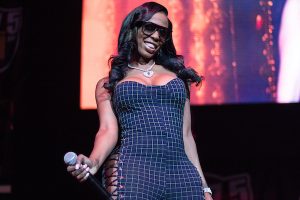 Kash Doll stepped into the music scene with her raw rhymes and classy attitude in 2014. Since then the Detroit native has made a name for herself with singles such as “Ice Me Out,” “For EveryBody,” “Check,” and more!

While the debate is usually surrounded by the rapper’s age, social media users seem to be trying to get to the bottom of a new topic.

“I’m so sorry but kashdoll needs to get her belly button done over I would hate to have paid for a botched body,” a user tweeted. Kash Doll shut down the rumors of having her stomach done after quoting the post and stating that she has a hernia. The rapper posted on her story regarding the post, “ain’t nothing wrong with a lil hernia boo!”

The rapper then hit her post with another story that explains why she hates comments about her hernia. “I just hate when people try to say I got work done on my tummy bc if my hernia…. Like noooo dumb dumb.”

After a few back and forth exchanges, the Twitter user who expressed her opinion later corrected her tweet. “So it’s a hernia, I know that must be uncomfortable and or painful. She should see about getting it removed. And I don’t care if I’m hurting y’all feelings,” she penned.

Regardless, Kash Doll looks amazing! We love to uplift our beautiful black queens!