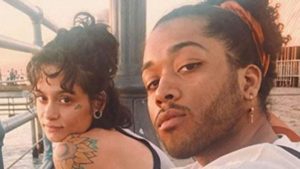 Kehlani spoke candidly about the dynamic of her relationship with her child’s father, Javaughn Young-White.

The singer shared a video on TikTok coming out as lesbian earlier this year and shared how her family reacted. “We know, duh,” she said they humorously responded.

Kehlani recently shared how her baby’s dad reacted to her publicly identifying as lesbian.

“I have a two-year-old daughter…She’s the best. Me and her dad are like really, really close friends, and the decision to start a family was really easy for us because we both believed in each other’s ability to be good parents. We just focus on being a team, honestly, and when I was able to tell him, like, I’ve come to newer terms with my sexuality and he’s super super super supportive.”

The “Nunya” singer said the co-parents are normalizing non-heterosexual relationships, as Young-White identifies as bisexual.

“Like usually where people would bring up ‘mom and dad,’ we also say ‘mom and mom’ and ‘dad and dad.’”

The post Kehlani Says Her Child’s Father Was Supportive When She Came Out As Lesbian appeared first on The Source.