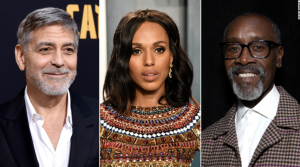 Several Hollywood stars are banding together to launch a new public film school in Los Angeles. Big names like Kerry Washington, Don Cheadle and more are partnering with the LA United School District, to create the “Roybal School of Film and Television Production”.

Their goal is to focus on helping students from underserved and underrepresented communities break into the film and television industry with the backing of Hollywood’s finest. Other stars joining them on this initiative are George Clooney, Grant Heslov, Eva Longoria, Nicole Avant, Tim Bevan, Eric Fellner, and Bryan Lourd.

“Our aim is to better reflect the diversity of our country. That means starting early. It means creating high school programs that teach young people about cameras, and editing and visual effects and sound and all the career opportunities that this industry has to offer,” Clooney said in a statement to Variety. “It means internships that lead to well-paying careers. It means understanding that we’re all in this together.”

“Physics is involved in how a cinematographer chooses a lens, math is a part of the foundation for a musical score in a film, critical-thinking skills are needed to design a set, screenwriters need a foundation in literacy, and a make-up artist needs to know the chemistry of the different materials they might use — and all of this will be tied into the curriculum at the school. We are excited to have the support of these extraordinary industry leaders to create opportunities for children throughout the Los Angeles area,” Superintendent Austin Beutner said in a press release.

CNN reports, the Roybal School of Film and Television Production, on the campus of the Edward R. Roybal Learning Center in the city’s Westlake district, will open in 2022 to 9th and 10th grade students, with plans to expand to grades 11 and 12 over the following two years. The founding advisory board also includes Nicole Avant, Tim Bevan, Eric Fellner, Grant Heslov, Eva Longoria, Bryan Lourd, and other accomplished industry professionals.