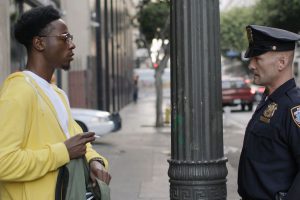 Durant and Conley served as executive producers on the film and joined Kobe Bryant as the only NBA player to have won an Oscar.

Two Distant Strangers stars rapper and actor Joey Bada$$, who gets stuck in a time loop where he repeatedly runs into the same police officer and is repeatedly killed.

If you haven’t seen the short film yet , you can find it still available on Netflix.