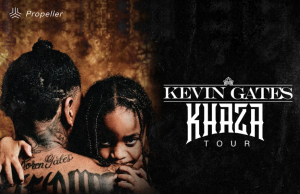 Kevin Gates is known for speaking his mind and fulfills every promise. Today, the multi-platinum selling artist has announced a partnership with social impact-focused digital platform Propeller, in conjunction with his upcoming massive Khaza Tour. The campaign will benefit causes that mean the most to him from mental health to ending mass incarceration and climate justice. For simply taking action and supporting the organizations Kevin has chosen, fans can enter to win one-of-a-kind prizes including a pair of VIP tickets and a virtual meet and greet with Kevin (2 tix for each city), and a grand prize flyaway trip to meet Kevin on the final stop of his massive tour in Atlanta that includes airfare, hotel, tickets and more. Fans can then continue completing additional actions to earn more points and increase chances of winning.

Organizations benefitting from the campaign include the Anti-Recidivism Coalition (ARC) who are working to end mass incarceration in California; To Write Love on Her Arms who are dedicated to presenting hope and finding help for people struggling with depression, addiction, self-injury, and suicide; NRDC whose mission is to safeguard the Earth, its people, its plants and animals and the natural systems on which all life depends; and his own organization with his partner The Kevin & Dreka Gates Foundation which they founded to educate youth and bring awareness to depression, mental health, financial hardships and many other trying issues that young people are faced with today.

“Just knowing the work that these organizations do to make a change, made me want to get behind them and support them,” notes Kevin. “I know ARC does a lot of work with helping previously incarcerated individuals reintegrate back into society and help them get back to their family. That’s not always an easy thing to do. I remember when I was locked up, that was the hardest thing, being away from family, especially my son Khaza. He was at home around a bunch of amazing women but I knew he needed his dad. I named this upcoming KHAZA tour after him to show him I love him and I’m here. We did it for Islah, now it’s his turn.”Dreka Gates — Kevin’s wife, manager and influential presence of social media — who is an active part of the campaign adds, “Supporting these causes makes my heart sing. I happily support them because I know, beyond a shadow of a doubt, that they are intentional in their efforts to really make a difference.”

In addition to taking action with these organizations, Kevin and Dreka have donated items straight from their closets to raise funds for their organization. Fans can bid on items including Kevin’s Red Letterman Bomber Jacket, which he notes “My baby, my red bomber jacket. We had our time together, now I’m ready to donate it for such a good cause.” Additional items include pairs of his Nike AF1-TYPE Summit White Shoes, Custom Colored Rose Nike ID Air Force 1 Shoes, ‘Light Bone’ Nike Air Force 1 MID ’07 Shoes, and a pair of Spruce Frog’ Nike Air Force 1 Utility Shoes. Dreka Gates has donated two pairs of kicks — her Adidas Yeezy Boost 700 V2 Hospital Blue and her Adidas Yeezy Boost 350 V2 Clay, noting “I’m a huge fan of Yeezy and went a little crazy at one point, buying every pair of shoes that I could get my tiny hands on. I’m so happy they can now support the Kevin & Dreka Gates Foundation.”

The post Kevin Gates And Propeller Team Up For Campaign Focused On Mental Health, Ending Mass Incarceration appeared first on The Source.