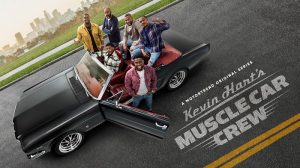 The six-pack of hilarious stars are entering a new chapter and are forming a crew of classic cars, but there is one hurdle, it’s an entirely new area for them to learn.

On Kevin Hart’s Muscle Car Crew, the team will learn from experts of the industry, both fans, and professionals, to restore their cars to their preferred peaks, while also exhibiting their individual styles. And of those styles is comedy.

Speaking with The Source, the crew’s chemistry emerges when discussing their car choices, especially after Boss says his Mustang is not tied into his personality.

“I want to be very clear that, that car does not represent my personality,” Boss joked.

“Boss’s personality, you gotta think, one would expect it to be aggressive and stuff but it’s actually gentle, he’s a nice guy,” Hart joked in response. “But you press the gas on that car it will try to do everything but end up exploding. That’s just like Boss.”

“We had discussions about cars and that’s how it came about, just talking and exchanging notes with each other,” Spank added.

“For me, my car is sentimental. A bug is the very first car I ever got and that’s what I told Harry,” Joey said.

John added, “And Joey has the oldest car out of the crew and he’s the oldest in the car.”

For a crew as tight as The Plastic Cup Boyz, the transition into cars and away from clubs only marks growth in their lives. The impact of cars allows for the guys to continue to interact both as a group and with new people.

“The numbers attached to our age is real and I don’t think there is anything we haven’t been able to do in life from then to now,” Hart said. “You have your trips, parties and nightlife. What an amazing time it is but you do grow up and in growing up you have to find what serves that need. For us it’s this, it puts us around new people, allows us to talk and we find excitement in that. This can go on to car shows, car events and doesn’t have to end. It’s about recreating, repurposing and continuing to elevate.”

John added, “It’s a world of discovery and you will be there to learn and discover with us. You will see and learn inside our friendship.”

In episode one, you see just that. After hitting up a local car show with their whips, the guys notice they have a lot of work to do and set out to find the perfect builder for their unit. From there the guys decide to put $20,000 into the upgrades to their car, which will be done by Lucky Costa of MotorTrend’s Hot Rod Garage. Whoever does the best job will become the president of the car club.

You can watch Episode 1 of Kevin Hart’s Muscle Car Crew and the rest of the series by downloading the MotorTrend app.