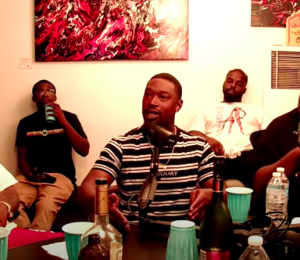 Kevin McCall sat down for a rare interview and things went left after he admitted to hitting a woman and became aggressive when he was confronted.

It started when McCall began recounting one of his many social media controversies.

“I just was talking s*** and trying to get attention just like I got Chris Brown’s attention when I posted a picture of Rihanna’s face all beat up. This is before I had allegations of the second victim… ‘alleged’ victim.”

But things took a turn when he said, “Which I did hit her, ’cause she hit me. Which is not cool.”

Thee Kraig Smith podcast co-host, spoke up and chastised McCall for hitting women but the true colors came out.

“I’ve even beat up n***as over this. So if you want a fade over this, if you feel like I shouldn’t hit women, catch a fade outside bro. So don’t sit here and act like you think I’m some weird a** n***a bro,” McCall said.

Brandyn couldn’t get more than two words out: “I don’t” before Kevin McCall continued.

Eva Marcille accused Kevin of abusing her while she was pregnant with their daughter.

“[The abuse] didn’t start for me until I was pregnant with Marley. And then about a month after having Marley, it didn’t stop; it got worse,” Marcille explained.

The rapper and producer has denied the claims but what do you think after his recent podcast appearance?

The post Kevin McCall Admits To Hitting a Woman on Podcast ‘Because She Hit Me’ appeared first on The Source.