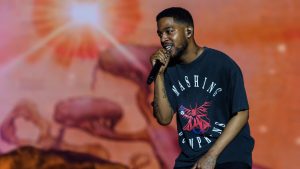 It’s no secret that Tik Tok that evolved into a virtual A&R portal of sorts–if we can call it that.

Whatever the case, it’s the platform that’s got labels jumping at any chance to create a hit that could possibly condensed into some second-long challenge, dance, or whatever the kids are doing these days. Amplified during quarantine, we’ve watched the social platform galvanize tracks and the subsequent careers of pretty much anyone with a sticky BPM from Megan Thee Stallion to SPOTTEMGOTTEM.

But not everyone is so grateful for internet-age adaptations of their creations. Most recently, Kid Cudi had something to say about a new challenge in which his “Day N Nite” track from 2008’s A Kid named Cudi album.

“I dont f-ck w what they did to my song on tik tok takin out the lyrics,” Cudi recently on Twitter. “We live in a strange time. Im not flattered.”

The challenge in question features user using the line “Now look at this” from the track in the first half before switching to a random video of something funny happening.

While some fans were quick to point out that it may not be as serious as Kid Cudi may think, he justified his emotions, comfortably citing the prdie he takes in his art and not necessarily being a fan of having it reduced to a meme.

“I dont think im makin it ‘deep’ by tweetin how I feel,” he replied. “Now if I was ranting thats another thing. Nothing wrong w me stating I dont approve, plus if u are such a fan, u know my lyrics are most important to me.” Cudi added, “Im passionate about my sh-t so idc who has a problem w that.”