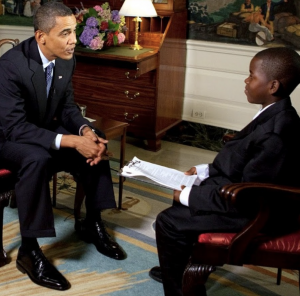 According to his sister Candace Hardy, the 23-year-old passed away Sunday, May 1. In an interview with The Palm Beach Post, Hardy confirmed his passing, and noted that it was due to natural causes.

“He was loved by everyone. No matter if it was a stranger, his mom or a family member, he was just a ball of light with so much energy. He was always positive, always had a smile on a face, and he was always a joy to be around. He left an impact on a lot of people.” said Candace Hardy.

Hardy to The Palm Beach Post that her younger brother, Damon, was pursuing a degree in communications at Albany state, and planned to return to school in the fall.According to her, he wanted to pursue a career in sports journalism covering the National Football League.

Back in 2009, Weaver stole the hearts of many when he sat down with former President Barack Obama for a conversation about education. Just 11-years-old at the time, Weaver asked question about school lunch, bullying and budget cuts.

“All across America, money is being cut from education. How can education be improved with all of these cuts?” Weaver asked the 44th President.

“Well, you know, we’ve actually here in the administration, have put more money into schools and there are a lot of schools all across the country that are getting new buildings and new facilities.” responded Obama. ” We’re now putting more money into training good teachers and giving them more support. And so we think its more important to put more money in the schools, but money alone is not going to make the difference. We’ve also got to improve how the schools are operated and we’ve really been trying to focus on finding the best schools and figuring out what they’re doing well and get the schools that aren’t doing so well to do the same kinds of things that the schools that are doing well to do. I hope we can see some improvement, not only with money, but with how the schools work.”

In addition to interviewing Obama, Weaver had the chance to sit down with now-retired NBA star Dwayne Wade and then-Vice President Joe Biden. .

The post Kid Reporter Who Interviewed Barack Obama In 2009 Dies At 23 appeared first on The Source.