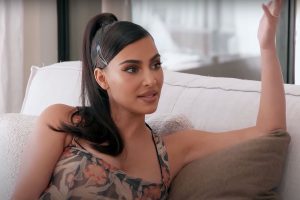 Kim Kardashian got real about her results from the baby bar.

Kim is on the road to becoming an attorney and she got candid about a bump in the road that she faced on a teaser for Keeping Up With The Kardashians.

The reality star shared that she failed the “baby bar” exam. “So, you guys, I did not pass the baby bar,” she told her sisters Kourtney Kardashian and Khloé Kardashian in the teaser released Wednesday.

Kim gave more insight in a confessional. “If you do law school the way that I’m doing it, it is a four-year program instead of your typical three-year program. And after year one, you have to take the baby bar. This one, actually, is harder, I hear, than the actual bar.”

The sneak peak of Thursday night’s episode also shows attorney Jessica Jackson informing the beauty mogul that she received a score of 474 out of 560.

“I spent six weeks straight, 10 to 12 hours a day, studying,” Kim said. “It was so important for me to take this, and to not pass gets your spirit down. It just makes you want to give up.”

After Kim Kardashian told her sisters she didn’t fail the baby bar by “that much” her sister, Kourtney Kardashian, reassured that their late father, Robert Kardashian, “would be really proud” of her “regardless.”

Van Jones is also another person who seems to be proud of Kim as she embarks on her journey.

He mused about her being one of the best advocates for criminal justice in a recent appearance on The Ellen Show.

Jones thinks that Kim will make for an “unbelievable attorney.”

“She’s already I think one of the best advocates that we have in criminal justice,” he added.

The CNN commentator confirmed that Kim has been going hard and “doing amazing” things with her studies. “I think she has used her platform to help people behind bars,” he said.

Van also noted that Kim is walking in her father, Robert Kardashian, footsteps who was a lawyer that famously worked on the OJ Simpson trial.

“Her dad was a lawyer and she always wanted to be a lawyer and so she decided, once she got a taste of what she can do using her platform, using her brain, she hasn’t let up,” he said.