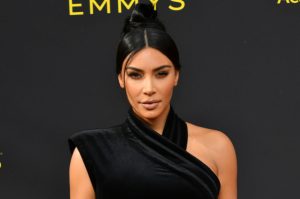 Kim Kardashian will seek a restraining order after someone mailed her a diamond ring and a plan B.

TMZ reports that the package was sent to her home and was discovered by her security guards earlier this week.

The outlet reports that the beauty mogul believes the package was sent by a man who showed up at her home several times.

The diamond ring looks official in the picture, but it’s hard to tell the quality.

The suspect initially began visiting Kim Kardashian’s home in February and popped up again a few weeks ago claiming he was picking her up for dinner.

The unidentified man has allegedly been harassing her online too. He posted a fake marriage certificate and another item that read, “Queen Kimberly” is “sitting up in thy big castle alone waiting for her Knight in Shining Armor.”

His social media accounts have been shut down and a restraining order will be filed as soon as possible.

Kim Kardashian, who is currently divorcing Kanye West, filed a protective order against another man who professed his love for her after multiple failed attempts to get inside of her home.

The post Kim Kardashian To Seek Restraining Order After Receiving Diamond Ring, Plan B In The Mail appeared first on The Source.