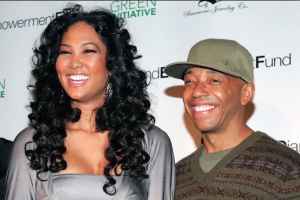 After Hip Hop mogul Russell Simmons filed a lawsuit against his ex-wife and fashion maven Kimora Lee Simmons and her husband, Kimora has now opened up about the allegations from the Def Jam co-founder, saying that his lawsuit is “nothing more than extortive harassment from a serial abuser,” according to a report from TheBlast.

As previously reported, Simmons filed a lawsuit against Kimora Lee and her hubby Tim Leissner for allegedly transferring shares of Celsius Energy Drink, worth tens of millions of dollars, belonging to Simmons to use as collateral for Leissner’s bond in relation to a federal case.

A statement from Kimora’s legal team disputes Simmons’ claim in a statement, stating, “Kimora and her children are shocked by the extortive harassment coming from her ex-husband, Russell Simmons, who has decided to sue her for shares and dividends of Celsius stock in which Kimora and Tim Leissner invested millions of dollars. This is an ill-advised attempt by Russell to use the legal system to access funds he is in no way entitled to, and which his own legal team confirms Russell did not pay for.”

The statement continued, “This extortion attempt is especially egregious given that Russell remains contractually in debt to Kimora for millions of dollars in unpaid business loans. Our team is actively working to put a firm end to his harassment, which continues despite Russell having fled the country – he will face his own reckoning in the US court.”

The post Kimora Lee On Russell Simmons’ Lawsuit: Nothing More Than Harassment From A Serial Abuser appeared first on The Source.