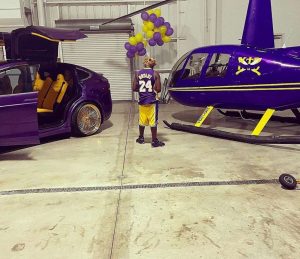 Kodak Black, who recently turned 24, is receiving backlash for his Kobe Bryant-themed birthday party.
The Florida rapper posted a photo on Instagram where he is posing next to a purple and gold helicopter.

He wore a Los Angeles Lakers jersey with the late athlete’s name and number displayed on the back. He was also posed between a purple and gold Tesla Model X and a matching-colored helicopter.

It didn’t take long for fans to point out the Kobe-inspired helicopter, especially considering the basketball legend tragically died in a helicopter crash, along with his 13-year-old daughter, Gianna “Gigi” Bryant, and several others, in January 2020.