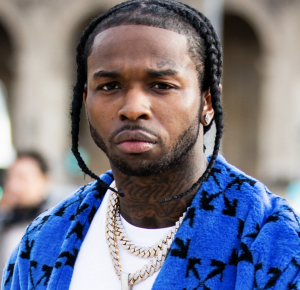 It’s been more than a year since rapper Bashar Jackson, AKA Pop Smoke was killed in a Los Angeles’ Hollywood Hills neighborhood. Now, more details are being released about his untimely murder.

According to New York Daily News, new testimony from a detective involved in the case says the rapper was shot and killed by a 15-year-old who was one of the five people arrested in connection to the rapper’s slaying.

The unnamed teenager is reportedly facing murder and robbery charges in the case, after allegedly admitting to pulling the trigger during a recorded interview with a cellmate in May 2020 at a juvenile detention center.

Friday, May 7, LAPD Det. Carlos Camacho testified that the unnamed 15-year-old defendant admitted to pulling the trigger during a recorded interview with a cellmate in May 2020 at a juvenile detention center.

“He admitted that he shot the victim three times with a Baretta 9 (mm.),” saiad Camacho.

According to New York Daily News, the 15-year-old alleged shooter “admitted that they asked for the jewelry” and then had “a confrontation” with Pop Smoke during the 4 a.m. home invasion on Feb. 19, 2020, the detective said.

“They got into a fight, and he shot him three times,” Camacho said, citing the youngest defendant’s recorded jail interview. “He said he shot him on the back.”

According to testifying law enforcement officials, all four defendants were members of the same gang and learned of Jackson’s whereabouts from his Instagram account.

They were reportedly able to see the address of the rapper’s Airbnb on a gift bag label and also that he had a stack of cash with him in one photo. The cash was later found still inside a drawer at the rental home, according to testimony Friday. Read the full story here.

The post LAPD Detective Testifies Pop Smoke was Murdered By a 15-year-old appeared first on The Source.