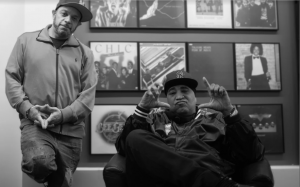 Legendize announces the upcoming podcast guests for the rest of season 1 featuring Craig G on July 6,  Big Daddy Kane on July 13 followed by DJ Premier on July 20. The podcast discusses the history behind hip-hop’s biggest hits, classic albums and iconic samples, with the legends that made them. Hosted by hip-hop pioneer DJ Marley Marl and co-host DJ Callie Ban, check out previous episodes with MC Shan, DJ Clark Kent, Naughty by Nature, MC Serch with 45King that was released on Tuesday – listen now.

DJ Marley Marl was an early innovator in the art of sampling, developing new techniques that resulted in some of the sharpest beats and hooks in rap’s Golden Age. He has worked with many artists and producers over the years that he personally invites for candid conversations on this podcast.

In discussing the podcast, DJ Marley Marl says, “Legendize is about bringing people together, people that made history, we’re gonna talk about songs, we’re gonna tell stories, we’re going to bring you inside like you were there.”

“Music is the universal language, so we’re gonna speak to the entire world,” co-host DJ Callie Ban adds. “I’m a fan, I’m working alongside the legendary DJ Marley Marl…. One thing about the Legendize podcast, when it hits you, you’re not gonna feel no pain, you’re just gonna love the feeling that you get.”

Hailing from Queensbridge, DJ Marley Marl revolutionized hip-hop when he discovered the practice of sampling drum sounds and creating his own boom-bap rhythms which yielded gems such as “The Bridge” by MC Shan and the timeless hit, “The Symphony” by The Juice Crew. His production work for many artists generally boasted a bright, booming, and robust sound that along with his ear for a catchy sample, helped move street-level hip-hop into more accessible territory. The sonic architect of Cold Chillin’ Records and the Juice Crew, DJ Marley Marl was rap’s first super-producer, crafting mega hits for LL Cool J, Rakim, Biz Markie, Big Daddy Kane, Roxanne Shante, TLC  and countless others.