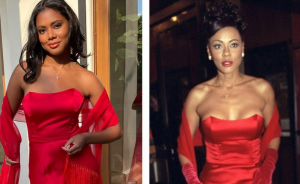 Lela Rochon’s red glamorous gown that she wore to the premiere of Waiting To Exhale was hanging in her closet until the perfect moment just came about.

Her daughter, Asia Rochon Fuqua, rocked the Scarlett ensemble to her prom and the actress mused over her creation on Instagram.

“Yes I saved the dress (heart emoji)… wasn’t sure why but now I know #vintage,” Lela wrote.

She posted a side-by-side picture of her wearing the gown 25 years ago alongside her daughter wearing it.

Asia is set to attend the University of Southern California this Fall.

The 1995 classic film was directed by Forest Whitaker and grossed more than $80 million worldwide.