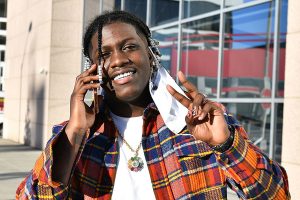 Lil Yachty is looking for inclusivity in the nail polish business.

The rapper promoted his new cosmetic brand, Crete, which he wants to combat toxic masculinity and the intolerance that prohibited boys from rocking nail polish.

“I’d like to introduce my new nail paint line @crete__co …. FIRST COLOR DROP MAY 21. 4 ALL GENDERS. FOR YOU, NOT THEM!” Lil Boat wrote on Instagram.

Individualism and inclusivity is true to Lil Yachty’s brand, who has been promoting those values since the release of his 2017 debut Teenage Emotions.

After the “Oprah’s Bank Account” rapper learned that 17-year-old Trevor Wilkinson was suspended for wearing nail polish, he create the cosmetic line in response.

“If someone wants to express themself in any type of way, as long as it’s not harming anyone or bringing anyone down, they should be allowed to do so. … You shouldn’t be punished or tormented for being you,” Yachty said before going into detail about his own nail polish line. “It’s essentially like, it’s unisex but I want it to be more focused on for men to use it, and to be more comfortable in their own skin. Because bro, it’s 2020, you know what I’m saying, like it’s about to be 2021—come on, what are barriers? We still have barriers?”

Would you wear nail polish from Lil Yachty?