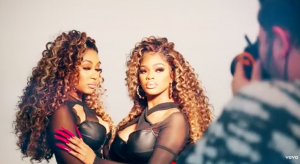 As promised, Yung Miami and JT released their viral TikTok hit, which was supposed to be originally featured on their 2020 City on Lock project. However, Miami revealed that they never received clearance for the sample.

The song samples “Planet Rock” by Afrika Bambaataa & the Soulsonic Force, and TikTok got a hold of the infectious song. Specifically JT’s verse which provides the instructions for the dance challenge.

Motown Records and Quality Control’s Coach K and Pee were able to work their magic and got the City Girls “Twerkulator” cleared just in time for the vaccinated City Girls and Boys to enjoy their Summer.

The duo shared a light-hearted behind-the-scenes video of the cover art photoshoot, and you can see them doing the viral dance challenge.

Enjoy the song in its entirety above

The post [LISTEN] City Girls Take Ownership Of Summer 2021 With Release of ‘Twerkulator’ appeared first on The Source.