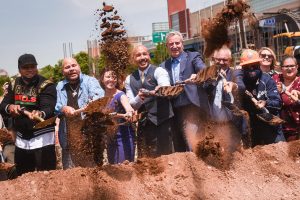 The Universal Hip Hop Museum is finally in progress and the Hip Hop Bible was in the building to exclusively cover the groundbreaking ceremony.

LL Cool J, Nas, Fat Joe, and Grandmaster Flash all spoke about their introduction to Hip Hop and reflected on the evolution of the genre, which was once considered a fad and is now the most influential musical genre in the world.

Hip Hop started off with a small party in the Bronx hosted by DJ Cool Herc, and now the culture’s heavyweights and giants will be immortalized in the very same place.

“The beat started in Africa then went to Puerto Rico and traveled through the Caribbean, and they tried to take the drum hundreds of years ago because that was our only form of communication,” Nas said. “But guess what? That drum they was trying to stop just turned out to be one piece of the science we bring to this planet.”

Fat Joe shared a sentimental story that further emphasized his point that “Blacks and Browns built Hip Hop together.

The “Lean Back” rapper revealed that his brother used to work as a crate boy for Grandmaster Flash, and that’s how his passion for rhyming was ignited.

In addition to the museum, “Bronx Point’s first phase will deliver 542 units of permanently affordable housing to the Lower Concourse neighborhood, along with approximately 2.8 acres of public open space. Additionally, the project will deliver an array of cultural and community-focused programming, including the permanent home of the Universal Hip Hop Museum, an early childhood space run by BronxWorks, and outdoor science programming run by the Billion Oyster Project,” as per the press release.