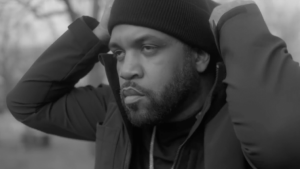 Lloyd Banks released his highly-anticipated album, The Course of the Inevitable.

The 18-track project was produced by Chase N. Cashe, Dual Output, and others.

The G-Unit rapper has been teasing the acronyms C.O.T.I on his social media for a while, and the vision was clear once he shared the album’s cover art featuring his son.

Lloyd Banks also shared a trailer for the album, further adding to the anticipation.

Listen to The Course of the Inevitable below:

This is the first musical effort from the New York emcee since his 2016 Halloween Havoc 3: Four Days of Fury. COTI is also the first studio album from Banks since H.F.M. 2 (The Hunger for More 2) dropped in 2010.

The post Lloyd Banks Makes His Return With ‘The Course of the Inevitable’ Featuring Styles P, Benny The Butcher & More appeared first on The Source.