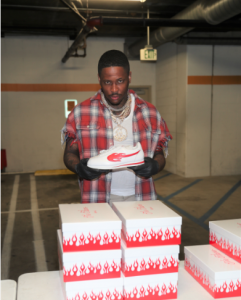 LA Native, YG, launches 4Hunnid “The Flame” footwear brand as an extension of his 4Hunnid LA based business. Yesterday, he showed up to Skid Row to give the $200 sneakers to homeless staying at the Union Rescue Mission totaling $10K, at the moment the brand went live on sale worldwide at noon! While YG was with the residents of Union Rescue Mission, the Block Runner sneaker sold out in less than 7 minutes.

YG’s “Block Runner” sneaker hit the market under 4Hunnid’s footwear line, The Flame, on Friday, March 26 via 4Hunnid.com. The Red/White Block Runner signals the first release of a series of sneakers dropping over the next year.

Developed in 2018 by YG and Chris Burnett, the Block Runner sneaker is a project that’s been under the wraps for three years. The first style release is presented in the red and white colorstory that YG has become synonymous for. The low-slung kicks sit on a custom sole, white tumbled leather, and feature a contrasting red The Flame logo that stretches across its quarter panel.

With heavy influence of his upbringing, the sneaker is a tribute to the place that raised him, “the Block Runner name is inspired by what 4Hunnid represents: the Westcoast.” said YG. “It’s only right our first sneaker caters to the streets and glorifies The Block because [the block] is where everything starts for me.”

“The name The Flame came from spending too much time trying to think of a krazy kool name but it was there the whole time, the logo; less is more.” -YG

The shoe launched exclusively online at 4Hunnid.com on Friday at 12PM PST with a retail sticker of $200. To commemorate and spotlight his first sneaker release, YG will be hosting an exclusive pop-up for his hometown of Los Angeles in early April with more details to follow.