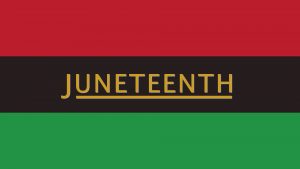 Juneteeth, a day commemorating the end of slavery in the United States, is officially recognized as a holiday in Louisiana.

According to AP news, the third Saturday in June will be celebrated as Juneteenth Day under a bill passed without any nay votes and signed by Gov. John Bel Edwards.

The House voted 87-0 for the measure by Baton Rouge Democratic Rep. Larry Selders, while senators gave it final passage 37-0.

Juneteenth, which officially falls on June 19 — honors the day in 1865 when enslaved Blacks in Texas were freed with the arrival of federal troops. Though slavery was not completely abolished until the 13th Amendment, which came six months later, Juneteenth has come to symbolize the end of slavery.

The post Louisiana To Make Juneteenth A Holiday appeared first on The Source.