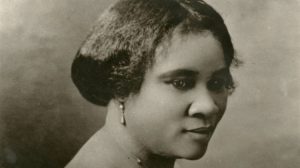 Since the beginning of time, women have been seen in the shadows of men in America, especially Black women. American history shows, African American women nearly always receive the short end of the stick, and have to work harder to pioneer their path to success.

One of the trailblazers for the path of women’s independence and entrepreneurialism is Madam C.J Walker, born Sarah Breedlove, this child of enslaved sharecroppers would become the first African American woman self-made Millionaire and one of the Twentieth Century’s most successful women entrepreneurs. In the early 1900s, Walker developed hair care products for scalp disorders that became a necessity for Black women. If you wanted healthy hair, you had to have Madam C.J. Walker’s Wonderful Hair Grower. Becoming a millionaire isn’t easy to accomplish today, so imagine the hardships Walker had to overcome. Her story epitomizes the cliché “From nothing to something.”

On December 23, 1867, Owen and Minerva Anderson Breedlove gave birth to their fifth child, who became their first free-born child, Sarah Breedlove. Both of her parents died by the age of 7, and despite being orphaned, and working in the cotton fields of Delta and nearby Vicksburg, Mississippi with her sister Louvenia, Sarah never lost hope. Throughout those tough times, she often said, “I got my start by giving myself a start.”

Her start came at the age of 16 when she and her daughter Lelia moved to St. Louis. By then, Sarah had already been widowed as her husband, Moses McWilliams, who fathered her then 2-year-old daughter Lelia, had died. In St. Louis, Sarah reunited with her four brothers, who were all established barbers. She worked and made an average of $1.50 a day over the next 18 years. At that time she also met Charles J. Walker, the man who would become her second husband and inspire the company name.

She was in her late 30’s when she created Madam C.J. Walker’s Wonderful Hair Grower to repair her scalp disorder. Through her Madam C.J. Walker Manufacturing Company, she developed a line of products, trained sales agents and helped thousands of African American women become economically independent. According to MadamCJWalker.com, owning her line of hair products has always been a dream of hers. Her husband, Charles J. Walker, worked with the press, and, in the beginning, he did the marketing for the business, but she became fully independent by 1910.

She started off selling her products door-to-door, but in 1910, she moved to Indianapolis. There she built a factory for her Walker Manufacturing Company and continued living her dream. Walker became more involved in the advocacy for black women’s economic independence. She developed training programs called the “Walker System” for her national network of licensed sales agents who earned commissions. Walker hired over 40,000 African American women and men in the U.S, Central America, and the Caribbean. She also founded the National Negro Cosmetics Manufacturers Association in 1917. Success came in abundance then. In her final years of living, she reported exceeding sales over $500,000, and her total worth surpassed $1 Million. She left behind a mansion in Irvington, New York dubbed “Villa Lewaro;” and properties in Harlem, Chicago, Pittsburgh, and St. Louis.

A pioneer of the modern black hair-care and cosmetics industry, she used a portion of her profits to support black educational institutions and civil rights causes. Madam C.J Walker’s ability to show perseverance, resilience, and courage is why she will always be revered in the Black community, not only for her business savvy but also for her philanthropy as well. During her run in becoming the first Black woman self-made Millionaire, she also donated a $1,000 gift to the African American YMCA. That would equal about $26,000 today.

Madam C.J. Walker is still honored today as The National Museum of African American History and Culture holds in its vast collections a two-ounce canister of Madam C.J. Walker’s Wonderful Hair Grower, her top-selling product, donated by collectors Dawn Simon Spears and Alvin Spears, Sr. Several other items, gifts of her great-great-granddaughter and biographer, A’Lelia Bundles, include advertisements, beauty textbooks, and photographs. On the lid of the two-ounce can appears an African American woman with thick, flowing hair. That woman was Walker herself.

Although Walker is the most notable, these African American Millionaires also made their mark in beauty-Annie Turbo Malone – founded Poro Products, designed to grow and straighten African American hair and became an international success with customers in the US, South America, Africa and the Caribbean employing over 175 people. She’s also credited with hiring and training Sarah Breedlove AKA Madam C.J. Walker. Sara Spencer Washington -Created the Apex News and Hair Company with a national sales force of 45,000 agents and 500 employee who produced and marketed her hair care and cosmetics

We salute these outstanding black women entrepreneurs and their contributions to our society. Let theirs and Madam C.J. Walker’s lives inspire you.

The post Madam C.J. Walker Story A Self Made Inspiration appeared first on The Source.