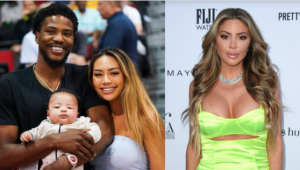 Following a very public affair that led his wife to file for divorce and almost ended his marriage, NBA player Malik Beasley offered up a public apology to his wife Montana Yao and son Makai for his affair with NBA star Scottie Pippen’s wife, Larsa Pippen.

“I wana say sorry for putting you in the situation you were put in the last few months,” the 24-year-old wrote to his wife on IG. “My head wasn’t were it was supposed to be.”

As reported, Beasley fling became public when photos of him and the 46-year-old basketball wife walking through a mall in Miami holding hands surfaced on the internet, with his wife seeing the pictures along with the general public.

It’s very clear that Beasley chose his family over the fling, but now let’s see if Yao accepts Beasley’s apology.

The post Malik Beasley Issues Public Apology To Family For Affair With Larsa Pippen appeared first on The Source.