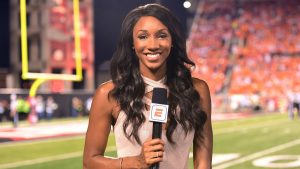 ESPN and Maria Taylor have jointly announced that the two have not reached a contract extension. Her career at ESPN will end with last night’s NBA Finals telecast.

“So thankful to Jimmy and all of my great teammates and friends at the SEC Network, College GameDay, Women’s and Men’s college basketball, and the NBA Countdown family,” Maria Taylor said in a statement. “The people who believed in me, encouraged me, pushed me, and lifted me up. Words are inadequate to express my boundless appreciation, and I hope to make them proud.”

Jimmy Pitraro, Chairman of ESPN and Sports Content commented: “Maria’s remarkable success speaks directly to her abilities and work ethic. There is no doubt we will miss Maria, but we remain determined to continue to build a deep and skilled talent roster that thoroughly reflects the athletes we cover and the fans we serve. While she chose to pursue a new opportunity, we are proud of the work we’ve done together.”

At the top of the month, Taylor’s time at ESPN became a bit murky once leaked audio appears to shows fellow ESPN reporter Rachel Nichols expressing frustration that ESPN gave Taylor the NBA Finals job. She suggested that the network should have instead made Taylor its NBA Finals sideline reporter over Doris Burke. Nichols said ESPN was “feeling pressure about your crappy longtime record on diversity.”

The new home for Maria Taylor could be not too far away. According to Front Office Sports, Taylor could take on a major role for the network, including hosting Football Night in America, working on Notre Dame broadcasts, and as a possible Olympic correspondent.