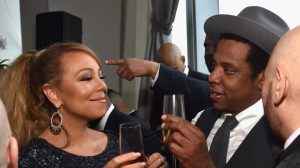 Mariah Carey took to social media to address rumors that she departed from Roc Nation following an “explosive meeting” with JAY-Z.

“The only “explosive” situation I’d ever “get into” with Hov is a creative tangent, such as our #1 song ‘Heartbreaker’,” the singer tweeted. “To the people who make up these lies I say “Poof! —Vamoose, sonofa*****”!”

On Friday, The Sun reported the story that Carey left Roc after a heated discussion with Hov.

“Mariah and Jay had an explosive meeting which did not go well at all,” a source close to the situation told the news outlet. “She has made it clear she wants nothing more to do with him and has called it quits with Roc Nation. She will formally depart in the next few weeks. It is a shame because they had done some great work in the last few years. But this meeting couldn’t have gone much worse.”

JAY-Z probably won’t ever respond to these rumors but Mariah Carey shut them down quickly.

The post Mariah Carey Refutes Claims of ‘Explosive Meeting’ With JAY-Z appeared first on The Source.