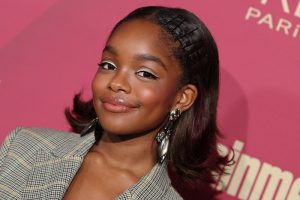 Marsai Martin has left an impactful mark on Hollywood at just 16 years old.

The Grown-ish star is the youngest executive producer in history, and she recently celebrated winning NAACP Image Awards for Outstanding Performance by a Youth and Outstanding Supporting Actress in a Comedy Series.

Martin now has a total of 11 Image Awards and she explained what the honor meant to her in a recent interview with The Hollywood Reporter. She also discussed her “no black pain” rule at her production company, Genius Entertainment.

Her take comes at a time where many people expressed that they’re growing fatigued with the exploitation of Black trauma. The conversation restarted following the release of the trailer for the upcoming thriller, Them.

Quinta Brunson weighed in on the conversation after Marsai Martin’s “No Black Pain” rule went viral. “I love this and am always happy to see more of it. I’ve pitched stories and have had an exec/studio insist on adding black pain to my project which had none. So, I don’t do the project and move on. That alone, is painful. It’s a unique problem,” she tweeted.

The post Marsai Martin Vows To Not Produce Projects About ‘Black Pain’ appeared first on The Source.