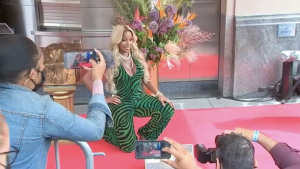 Mary J. Blige is recognized as an R&B legend in the music community. Since the early ’90s, the singer has earned eight multi-platinum albums, nine Grammy Awards, and two Academy Award nominations. Now, the singer-songwriter has been inducted into the Apollo Theatre’s Walk of Fame.

This honor is a full-circle moment for the star. Since Blige’s career kicked off after her appearance on Showtime at the Apollo in 1992. In an interview with Reuters, the singer shared how Apollo played a role in her success.

“It means everything. I mean the Apollo is the most important thing to our culture as African-American artists. If it wasn’t for the Apollo, we wouldn’t have a chance. People wouldn’t have gotten discovered,” she said.

“This was the first place I made it, you know, before Madison Square Garden,” she added. “This is it.”

“Without the Apollo, there is no recognizing of Mary J. Blige,” she said.

While expressing gratitude for being honered. Blige announced an uocoming documentary that commemorates the 25th anniversary of her second album “My Life.”

I’ve got something coming for y’all June 25th. It’s the My Life documentary. And that’s us. So, you know, I’m going to let it be a surprise, but thank you so much.” said Blige.