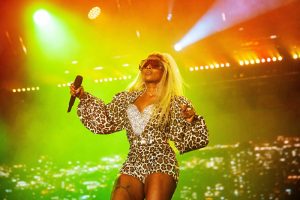 Mary J. Blige unveils the first-look at her upcoming My Life documentary.

The recent Hall of fame inductee announced the release of this project during the Apollo Walk of Fame induction.

My Life will examine Mary J. Blige’s life during the time she created her classic 1994 album.

“I’m so excited to share the trailer for my new documentary,” she captioned the preview. “Get ready to learn the story behind one of the most inspiring albums of all time in.” The film’s synopsis reveals that viewers will see Blige speak about “the demons and blessings” behind the album’s songs. “My Life is probably my darkest album at one of the darkest times I’ve had,” she says in the trailer. “Most of the time, I was just depressed and didn’t want to live. I had it all inside and I was able to sing it and write it, and I didn’t know that so many people felt the same way.”

My Life is coming to Amazon Prime on June 25th, and the “Real Love” singer will perform the album for the first time ever to celebrate the release of the documentary.

Check out the trailer here.