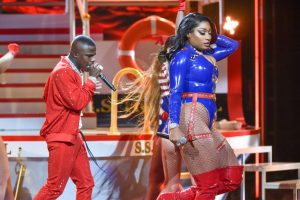 The BET Awards Nominations are in and Megan Thee Stallion and DaBaby are leading the pack with seven nods each.

Cardi B and Drake trails right behind them with five nominations.

The Hot Girl coach is up for Best Female Hip Hop Artist, Video of the Year for “WAP,” Album of the Year for Good News, twice for Viewer’s Choice Award, and Best Collaboration for her features with DaBaby on “Cry Baby” and with Cardi B for “WAP.”

DaBaby was nominated for Best Male Hip Hop Artist, Album of the Year for Blame It on Baby, Viewer’s Choice Award, and four nominations for Best Collaboration for “Rockstar” with Roddy Ricch, “Cry Baby” with Meg, “For the Night” with Pop Smoke and Lil Baby, and the “What’s Poppin” remix with Jack Harlow, Lil Wayne, and Tory Lanez.

“We are back and excited to bring culture’s biggest night, the 2021 BET Awards, safely back to Los Angeles to celebrate this year’s incredible roster of nominees,” Connie Orlando, EVP Specials, Music Programming & Music Strategy, said in a statement. “We broke ground as one of the first official award shows to move forward during the global pandemic and we are ready to take our pioneer status to the next level with the return of an audience to celebrate the best and brightest creative minds in the entertainment industry.”

BET set the tone for virtual award shows last year and they’re set to return with a live show on June 27th.