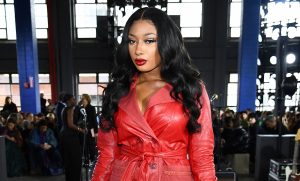 Teaming up with Fashion Nova, Megan Thee Stallion is donating $100,000 to the Breonna Taylor Foundation on the anniversary of Taylor’s death.

It was via Instagram that Meg made the announcement to pass along the sum to the foundation started by Taylor’s mother, Tamika Palmer. Palmer started up the Breonna Taylor Foundation shortly after her daughter was gunned down by law enforcement as she slept in her bed a year ago in Louisville, Kentucky.

“A year ago today Breonna Taylor was tragically taken from her family and friends,” read Megan’s Instagram post. “Breonna’s name continues to be a catalyst for change and a powerful reminder that justice has still not been served. Fashion Nova and I are proud to give $100,000 to the @breonnataylorfoundation created by @tamikalpalmer to honor the memory of her daughter.”

Saturday (March 13th), many more gathered in Louisville to march in Breonna’s memory with a continued agenda in bringing about justice for women of color unjustly killed or harmed at the hands of police.

The Breonna Taylor Foundation is an instituted reminder of this fight.

“The core mission of the foundation is to support economic, social, and racial justice through police reform and government accountability,” Megan further explained of the organization. “The foundation also seeks to help young people to realize their full potential, empowering them to participate in political processes and achieve better health, with mentorship programs for high-school girls, after-school initiatives, and educational support.”