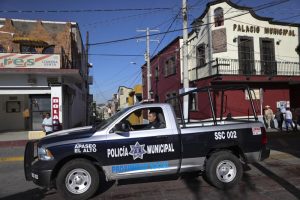 The Jalisco cartel of Mexico has declared war on the government. The Associated Press reports members of the cartel are kidnapping Guanajuato police officers on their days off and murdering them in front of their families.

“If you want war, you’ll get a war,” a cartel-issued message said. “We have already shown that we know where you are. We are coming for all of you… For each member of our firm (CJNG) that you arrest, we are going to kill two of your Tacticals, wherever they are, at their homes, in their patrol vehicles.”

“A lot of [officers] have decided to desert. They took their families, abandoned their homes and they are fleeing and in hiding,” said security analyst David Saucedo. “The CJNG is hunting the elite police force of Guanajuato.”

The post Mexican Cartels Are Hunting Police At Their Homes appeared first on The Source.