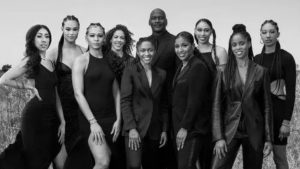 Michael Jordan is making an effort to amplify women’s voices with his latest business move.

In celebration of the WNBA 25th anniversary, the ‘Jordan Brand’ recently added eight women to the family, making 11 women officially a part of its roster. In a statement about the extended female roster, Jordan shared his excitement.

“The world needs female voices, and we can’t ignore that or else we’re not growing,” he says. “The Jordan Brand is committed to giving women a platform to amplify their voices, which influence, inspire and push culture forward.”

“To have 11 Black women be a part of this brand allows the younger generation and younger women to see that they can be like us — they can have that opportunity. I didn’t see that growing up.” said Jordin Canada, Seattle Storm point guard.

According to Nike News, the WNBA’s activism on and off the court caught Michael Jordan and his brand’s attention. In a statement about the newest additions to the Jordan Brand, the company named the WNBA’s dedication of its 2020 season to the #SayHerName movement; the #WeGotUsChallenge, an initiative to support Black-owned businesses; and their own personal engagement as examples.