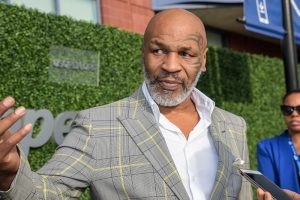 While real boxing is going on in the world, fight fans cannot keep their eyes off the issues of the Paul Brothers and Floyd Mayweather. In case you missed it, at the first face-to-face between Logan Paul and Money Mayweather, Logan’s brother Jake showed and took the champ’s hat leading to a brawl.

The fighter of all fighters, Mike Tyson, weighed in on the fight and answered if Mayweather had a chance “No. He’s going to get beat up pretty bad.”

The fight is set for June 6 in Miami, hopefully, Mayweather doesn’t pick him apart too bad.

The post Mike Tyson Predicts the Result of Mayweather-Paul Fight appeared first on The Source.