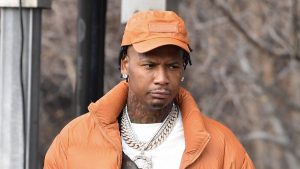 Just a little over a week ago, Moneybagg Yo was caught up in the wonders of a $125,000 booking fee.

Now, following the release of the Memphis rapper’s A Gangsta’s Pain–his most successful release to date, Bagg has already raised his prices, adding $75,000 to the fee.

Chatting with TMZ at the Los Angeles International Airport, the emcee told the outlet that he is now charging $200,000 a show and has his eyes set on a price tag of half a million on the horizon.

The upward trend in his booking fee has been a topic of discussion throughout the span of the pandemic as the Memphis star found himself among a class of stars who found particular success in the world’s shutdown. Its recent boost has naturally been due to the success found in A Gangsta’s Pain, which is eyeing a No. 1 debut on the Billboard 200 chart following its April 23 release.

The set is expected to sell somewhere between 110,000 and 120,000 album-equivalent units in first-week numbers, set to unseat YSL and Young Thug’s Slime Language 2.