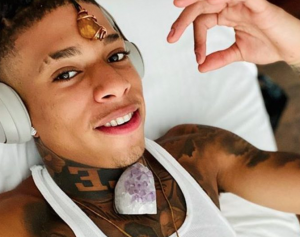 Memphis slang spitter NLE Choppa has been very vocal about putting down the purple drank and has even been encouraging his peers to follow his lead.

Earlier this week, Choppa launched an “anti-lean challenge”, trying to get young rappers and Hip Hop fans to pick up a pint of chlorophyll in place of the promethazine and alcohol.

Moneybagg Yo replied to Choppa’s #ChlorophyllChallenge with a simple handshake emoji.

NLE Choppa chose chlorophyll, the natural chemical known for giving plants light and water absorption, because of its preventative properties against cancer, how it boots red blood cells in the circulatory system and even helps with weight loss.

The post Moneybagg Yo Responds To NLE Choppa’s Anti-Lean Challenge appeared first on The Source.