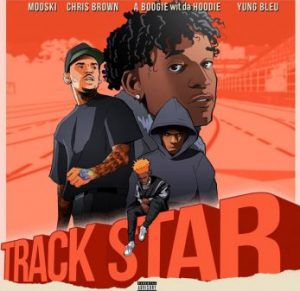 Mooski has been running up the charts with his hit song, “Trackstar.” The melodic crooner first released the viral track during the Summer of 2020. After it caught the attention of Tiktokers, and more specifically CityBoyJ who created the #shesarunner challenge, the rest was history.

Since then the song has been certified gold and has recently claimed the top spot on Urban Radio charts. In April he dropped the official video, starring New Jersey artist, Coi Lerai.

Now Mooski is looking to keep the momentum on a high with the “Trackstar” remix. Last weekend he took to his IG to make announcement.

“Trackstar remix, 5/18 with @bleuvandross @aboogievsartist. Who you think the 4th artist is?”

Based on the silhouette, fans unanimously guessed it to be Chris Brown and they were spot on.

While the track was slated to be released at Tuesday at midnight, Mooski gave an update on his IG apologizing to his supports about the wait. He promised that it would be worth that wait. Was Mooski right in his word?

Check out the “Trackstar” remix below.