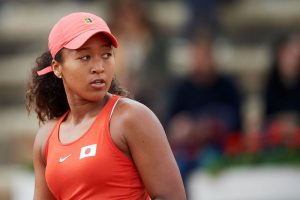 Naomi Osaka was hit with a $15,000 fine for skipping the first press conference of the French Open.

The 23-year-old was also threatened with disqualification if she continues to snub the media.

Osaka announced her plans to refuse any media obligations ahead of the tournament and cited her mental health.

Although she earned a 6-4, 7-6 (7/4) victory over Romanian World No.63 Patricia Maria Tig, Naomi Osaka is still being reprimanded for Sunday’s match.

“We have advised Naomi Osaka that should she continue to ignore her media obligations, she would be exposing herself to possible further code of conduct infringement consequences,” said a statement from the four Grand Slam tournaments on Sunday after she was fined.  “As might be expected, repeat violations attract tougher sanctions including default from the tournament and the trigger of a major offense investigation that could lead to more substantial fines and future Grand Slam suspensions.”

French Tennis Federation president Gilles Moretton previously described the tennis prodigy’s attitude towards the media as  “a phenomenal error” and “not acceptable.”

The four Grand Slam events claim they wrote Naomi to “check on her well-being and offer support.”

“She was also reminded of her obligations, the consequences of not meeting them and that rules should equally apply to all players,” the statement added. “Naomi Osaka today chose not to honor her contractual media obligations. The Roland Garros referee has therefore issued her a $15,000 fine.”

Naomi Osaka took the high road with the French Open but shared a cryptic tweet, “Anger is a lack of understanding. Change makes people uncomfortable.”