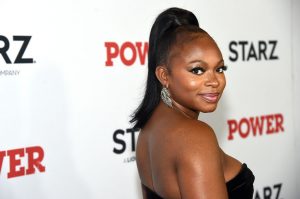 Whelp! Naturi is sticking to her story! The 37-year-old POWER actress is calling out the integrity of Kiely Williams’ story following an alleged chicken fight between the former bandmates back in the day.

Recently, Naturi Naughton made the public decision to stand by Phylicia Rashad after Rashad received a large amount of backlash for supporting the release of Bill Cosby.

“Why are Black People so quick to #Cancel each other!” Naturi stated. We are ALLOWED to have different opinions and it doesn’t make you ANTI-anything! @phyliciarashad I stand with you! #TheCosbyShowChangedLives,” Naughton penned.

Since Naturi stepped in the ring of fire, social media users then began to criticize her decision to stand with Phylicia Rashad. One fan tagged ex-bandmate Kiely Williams and said, “come look at this.”

“Omfg. Somebody bring me a two piece. She talking crazy again,” said an account that seemingly belongs to Kiely Williams.

“Finally! She tells the TRUTH! Haha… worrying about me, you done told on yourself! #Grabmeabiscuit while ur at it boo! #Lying4years,” Naturi tweeted.

A while ago, Naughton made claims that Kiely and she had an argument that led to a fight in KFC. While Kiely has denied the accuracy of the details, Naturi is sticking to her story! Check out the clip here.