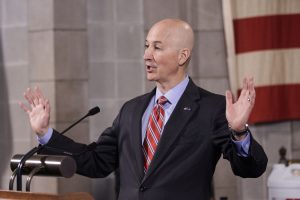 In Nebraska, the legalization of cannabis is currently a bill on the docket of legislators, but the state’s governor is vehemently opposed.

In a recent press conference, GOP leader Pete Ricketts went into great detail about the effects that legalization would essentially have on our younger generations and he minced no words in his account.

“This is a dangerous drug that will impact our kids,” Ricketts said, speaking with the press on Wednesday (March 10) . “If you legalize marijuana, you’re going to kill your kids. That’s what the data shows from around the country. […] Big pot is a big industry. This a big industry that is trying not to be regulated, to go around the regulatory process. And that’s going to put people at risk when you go around regulations that are designed for the health and safety of our society.”

The bill in question is Legislative Bill 474, introduced by Senator Anna Wishart in January as a measure to help improve the lives of Nebraska’s families.

“On the journey to legalize medical cannabis in Nebraska, I have met so many brave people that inspire me,” she previously said. “Veterans who have lost limbs in war serving our country, cancer survivors who have beaten all odds, people with debilitating pain who refuse to give up, and kids like Colton who suffer from seizures at such a young age and still show up to their life with a smile. All of these Nebraskans deserve the right to access a plant-based medicine that has evolved with humans for over 10,000+ years. None of them should be treated like criminals in our state.”

The proposed bill addresses the medicinal use of cannabis only. It would not legalize nor decriminalize recreational marijuana in the state with strict measures on the means of consumption and virtually no protections for users. Patients would only be allowed to consume cannabis in tincture, oil or pill form. Smoking the plant in private or public spaces would still be prohibited, and there are no proposed employment protections for those who have a registered medicinal use card.

But, go off Ricketts.