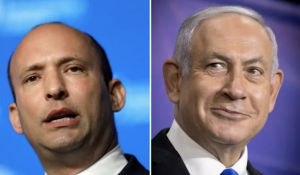 Israel’s longest-serving prime minister Benjamin Netanyahu will no longer be the country’s leader. After 12 years in power, and three before that, Netanyahu has been ousted.

According to MSNBC News, a vote of 60-59 passed in the Israeli parliament Sunday, making things official. Following the new government’s swearing-in, the former prime minister and his right-wing Likud party moved to the opposition.

In addition to this, Netanyahu’s former protege, Naftali Bennett, will serve as the next prime minister, holding office for the first two years of the new government’s term. Following this, he will hand the role to Yair Lapid, the leader of the centrist Yesh Atid party.

MSNBC reports, the government will be made up of a broad group of Netanyahu opponents that includes the United Arab List, known in Israel as Ra’am, which made history as the first Arab party to join an Israeli governing coalition.

Bennett is reportedly the son of American immigrants. He’s also a former settler leader whose nationalist politics contrasts with several of the dovish left-wing parties included in his unwieldy coalition.

“We will focus on what can be done, instead of arguing over what is impossible,” he said when announcing his deal with Lapid.

Sunday, Bennett gave his word to continue Netanyahu’s confrontational policy in a speech prior to the vote, opposing any movement from the U.S. to revive the dismantled Iran nuclear deal.

“Israel will not allow Iran to arm itself with nuclear weapons,” Bennett said. “Israel will not be a party to the agreement and will continue to preserve full freedom of action.”

The post Netanyahu ousted after a 12-year reign as prime minister appeared first on The Source.